You are free to use these rules in your own private games; however, if you plan on utilizing them in any other way please contact me.

In my tenure as a GM over a long-running Pathfinder game, I found my players eventually going into levels beyond 20. For a long time there was no official ruleset for handling epic levels in Pathfinder. The Mythic Handbook is still the closest thing Pathfinder has to “epic” rules unless you utilize D&D’s Epic Level Handbook. However, I don’t feel like the Epic Level Handbook really fits the spirit of high-level Pathfinder play, so I wrote up a custom set of prestige classes to be utilized by my players beyond level 20.

I have posted these classes (and my other rules) here on Google Docs. I also created a set of tables for Epic XP requirements for levels 21-40, which you might find useful if you’re trying to run an epic-level Pathfinder game. 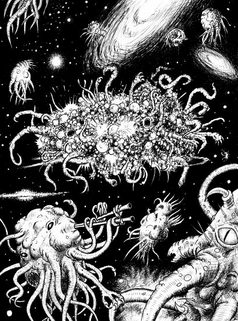 As a challenge to myself to see if I could use Pathfinder’s Mythic rules appropriately, I designed a mythic-class monster for my party to face. I chose Azathoth, a shapeless mass of pure chaos that the players had encountered a few times due to planar mishaps during high-level play. For the most part, I designed Azathoth by the book and tried to balance the encounter for a party of six 20th-level Pathfinder characters. (If you didn’t know, 20th-level Pathfinder characters are insanely powerful, especially in a medium- or high-magic campaign setting.)

The stats for Azathoth are available here on Google Docs. 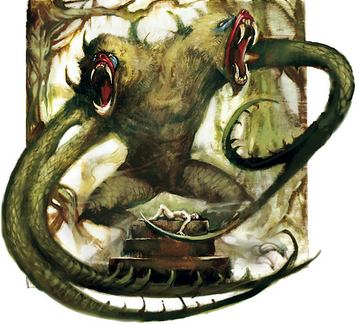 In my latest campaign, Demogorgon was the ruler of the entire Abyss and the end goal for the players was to defeat him. None of the stats I was able to find for him really “clicked” with me, so I drew up my own with inspiration from several other sources. Unlike Azathoth, Demogorgon does not strictly follow Pathfinder’s monster-building rules.

You can find the stats here on Google Docs.