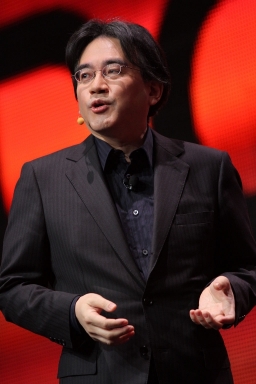 Photo By Official GDC [CC BY 2.0] via Wikimedia Commons

As anyone with even a passing interest in games knows by now, legendary developer and CEO of Nintendo of Japan Satoru Iwata passed away last month. His influence on Nintendo’s direction is unmistakable, and his nature as a fun-loving “games first” kind of guy was unquestionable. The loss of such a juggernaut (still in his prime) is one that has resonated throughout the industry.

Truly, Iwata was unique; he was not just another spoke in the ever-grinding wheel of the games industry. The outpouring of respect for him in the wake of his passing goes to show that even though he may not have been as well-known as Miyamoto, people have an appreciation for his work and what he stood for.

Now that he is gone, the question looms over our heads—that ominous specter of “Where will Nintendo go now?” Iwata had a very clear vision, and was the steel wall of defense against the shareholders’ push toward quick, cash-in mobile development. Without his guidance, can Nintendo stay on course? Everyone is asking this question; it’s adequately covered in a thousand other places, some of them more respectfully than others.

More pressing to me, however, is the loss of the ideals that he championed. Nintendo, with Iwata behind the wheel, was the “fun” company. You go to Nintendo’s console when you just want to have fun. Whether it’s the Wii or the Wii U, no one can dispute that Nintendo’s games have an intense, laser focus on pure “fun” without any of the cruft that weighs down modern games. I’m willing to bet that Mr. Iwata was a driving force behind that focus.

That spirit of “fun” is so sorely lacking in the industry right now. Games are more serious than ever. Every time I hear the word “cinematic” in relation to a video game, I cringe. I don’t need every game to be a Hollywood-esque drama, slamming me in the face with heavy topics and overdone cutscenes. Sometimes I just want to pick up a controller and have fun for 20-30 minutes. Guess what? Every time I find myself wanting to do that, I turn on the Wii U.

Without Iwata, will Nintendo continue to be the “fun” company? Probably. That’s their niche now and most of the games they announced at E3 this year fit into it well enough. Indie games also frequently concentrate on raw fun factor. With the games industry in Japan waning, however, and the western studios busy working on their $100 million Hollywood-style blockbuster games, how long can Nintendo alone carry the torch?

What we need is more studios willing to sit down with a game and really chisel it down until nothing is left but pure fun. All of the “pet features” of the designers and developers need to be on the chopping block. If it’s not fun or essential to facilitating the fun, cut it. We need more studios willing to say, “Video games are meant to be just one thing. Fun. Fun for everyone.”

Anyway, that’s my two cents on the issue. I hope no one thinks that I’m piggybacking on Iwata’s death to push my own viewpoints. Rather, I think these issues are very core to who he was as a developer and CEO of Nintendo. I believe they deserve more discussion that they get, and I think he would have agreed.