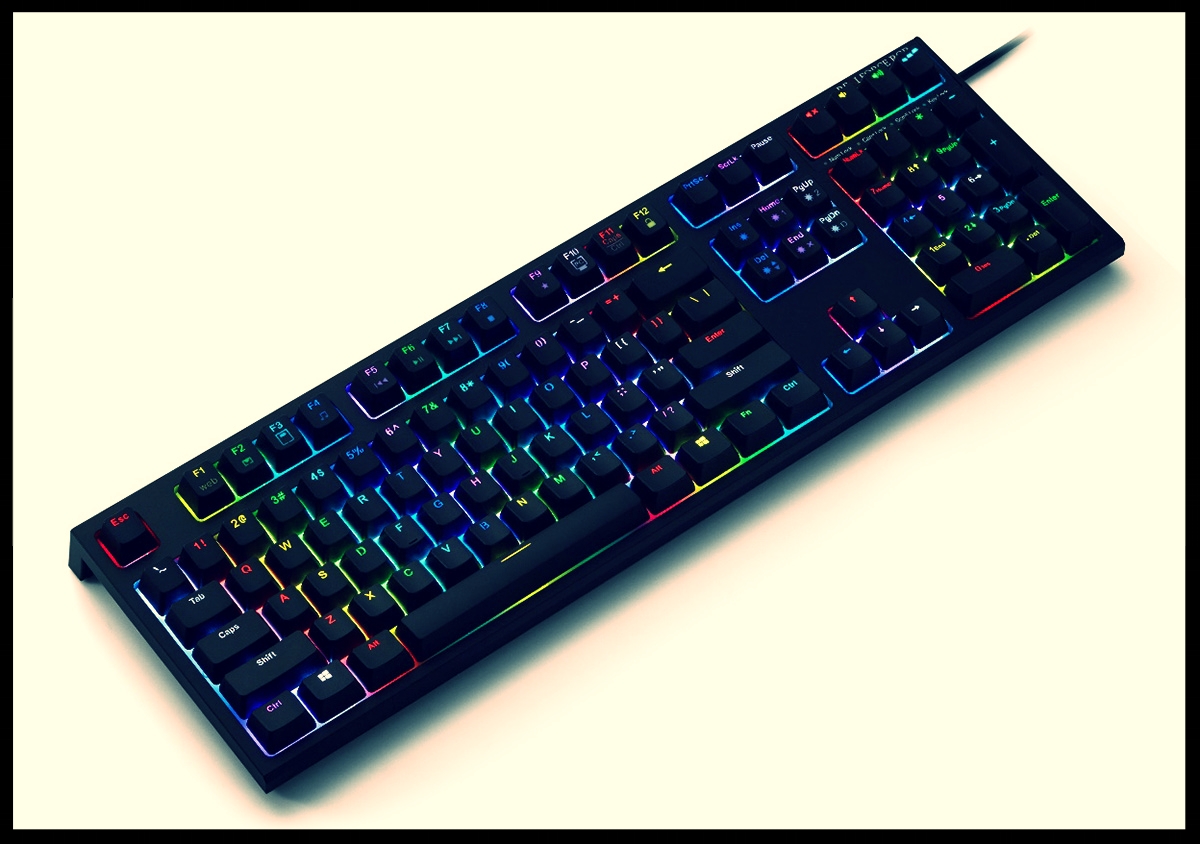 If there’s one thing I’ve learned in my time as a part of the mechanical keyboard community, it’s that artisan keycaps are overpriced and trashy. Alright, alright, maybe that’s just my opinion—what I’ve actually learned is that people are heavily divided over Topre switches. Many people swear by them as the “endgame” of keyboards. Possibly just as many will deride them as glorified rubber dome switches, hardly better than what comes in a basic Dell keyboard. As one might expect, the conflict only made me more curious; what’s the big deal? 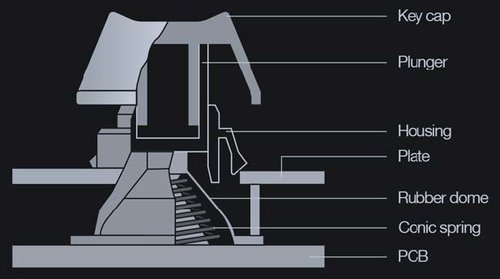 For those not in the know, Topre switches are a unique key switch that can best be described as a hybrid between mechanical switches (like Cherry MX) and rubber dome switches (like you’d find inside the keyboard packed with your new PC from Best Buy). However, unlike traditional rubber domes, which often sit atop a mushy membrane that detects key presses when the dome is fully depressed, Topre switches are capacitive and sit atop a high-quality PCB. To oversimplify, this means that the key does not need to be fully depressed in order to register; instead, like more traditional mechanical designs, typists can press it just enough to actuate the switch and then release. 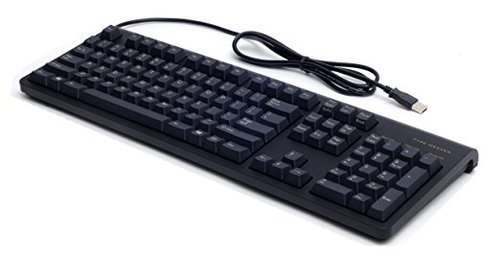 Topre Corporation’s keyboards are mostly what I would call business keyboards. They have basic designs, simple layouts, and while sturdy they often lack the comforts of more consumer-oriented mechanical keyboards like the “gamer” offerings from Razer and Corsair. It’s clear that the emphasis is placed directly on the typing experience… or at least that’s how it was previously. Now there exists a full-sized Topre keyboard with full RGB backlighting and a configurable actuation point for high-performance gaming. This keyboard is the Realforce RGB, and I decided to buy one as my first foray into the land of cup rubber.

The elephant in the room is always going to be the price. At approximately $250, the Realforce RGB is one of the most expensive computer accessories you can possibly buy. For that kind of money, you could buy two high-quality Cherry MX-based keyboards. You could buy 10 Logitech keyboards. You could even buy 20 generic keyboards at Walmart. My first thought when I saw the price of the Realforce RGB was that it must be made from 100% aluminum, with pleasantly thick and robust keycaps. Imagine my disappointment when I learned that it was, in fact, just a regular old plastic keyboard with decent but unexceptional ABS caps.

To really put the cherry on top of the sadness sundae, I quickly realized that the build quality is actually sub par. On my board, the plastic front panel has a lot of give to it. It creaks when you pick it up by the sides, as I often do when readjusting it on my desk mat. It feels particularly flimsy, though I haven’t risked taking it off to verify. The USB cable is non-detachable and not braided. The cable channels on the bottom of the keyboard, while a nice addition, do a very poor job of holding the cable. The keyboard is heavy enough and feels stable; I haven’t felt like I was going to break the thing yet, but for the $250 price tag I expected better. When a company like Razer is making products that feel more premium at half the price, there’s a problem.

Going back to the keycaps, most other Topre keyboards have nice PBT keycaps. PBT plastic is unlikely to “shine” over time—it’s resistant to the effect of your unavoidably nasty finger oils, which cause keys to become shiny and lose their texture. The Realforce RGB unfortunately has ABS caps. I’ve only owned mine for a couple of months and I’m already seeing the dreaded shine. Perhaps the most egregious sin here is that the thicker caps used on other Topre boards help contribute to the wondrous “thock” sound that they’re so famous for. The Realforce RGB sounds noticeably less satisfying than other Topre products. Thankfully, the caps are double-shot so the lettering should never wear away, but again: I figured I would be getting more for my dollar here.

So, what are you paying for when you drop $250 on the Realforce RGB? Primarily, you’re paying for those sweet Topre switches. Proponents of Topre praise it as the pinnacle of switch engineering. They claim that nothing is more comfortable to type on, that nothing sounds as good or feels as satisfying. When you buy a Topre keyboard you’re paying not just for all the rubber, but also the legacy. Does it live up to the hype?

I’ve found that typing on Topre is akin to typing on a perfectly balanced, smooth, and snappy tactile mechanical switch, but without the roughness that often comes with Cherry MX and clone designs. The rubber used in these switches must be some kind of magic, because it lacks any kind of mushiness. The level of clean feedback in each key press is rivaled only by the old guard of legendary keyboards like the Model M. Despite owning 16 keyboards now, with various switch types, I find myself coming back to the Realforce RGB over and over again just for the purity of the experience.

Topre switches aren’t usually very stiff. They only go as high as 55g from the factory and the Realforce RGB requires only 45g. On lesser switches like Cherry MX Brown, this means frequently bottoming-out the keys, which leads to fatigue and lots of noise. The high tactility of Topre means that they feel just stiff enough most of the time. Since the Topre design is similar to a rubber dome in mechanism, all of the force goes into the top of the press. Once it actuates, it goes quickly to the bottom. In many competing switches this is uncomfortable, but something about Topre helps cushion the landing. I tend to prefer heavier switches, but typing on the Realforce is an exception.

To answer my own question: yes, I think the Topre switches live up to their hype. They’re a surprisingly deft balance between the feedback and consistency of a mechanical switch, with the comfort and smoothness of a good rubber dome. They’re way over-priced, even for how great they are, but it’s impossible to find a typing experience quite as refined as Topre. It’s not for everyone—some people will be annoyed by the placement of the tactile bump at the top of the travel, and others will miss the more deliberate, nuanced feeling of “true” mechanical switches. For people who just want a tactile typing experience that sounds good, feels comfortable, and is immune to the imperfections of Cherry MX switches, Topre is worthwhile.

As alluded to previously, Topre is renowned for its sound. While the Realforce RGB doesn’t quite live up to the legend, it does have a very satisfying sound… at first. The press itself is deep, full, and subtle. If you avoid bottoming out, you’ll find that the switches themselves make almost no noise. On release is when you get the audible “clack” that makes it sound more like a traditional keyboard. I might be alone in this, but I find the “clack” of this keyboard incredibly annoying. Maybe I was lured in by false accounts of how dense and quiet Topre is supposed to sound, but the release noise sounds exactly like what it is: a plastic slider being shot upwards by recoiling stiff rubber. Because of that upstroke sound, the keyboard is deceptively loud in practice. It’s no Cherry MX Blue, but be aware.

As you might expect from a keyboard with RGB in the name, the Realforce RGB has 16-million color per key backlighting. This is amazing to show people if you want to wow them with your expensive keyboard, but in practice the light show is just distracting. I always end up setting it to the solid white preset where keys turn blue for a moment when pressed. It’s cool and practical without being showy. The colors themselves are well-represented and mostly accurate, with only a slight blue tint, and they animate well.

Fans of this keyboard will probably tell me all about how the keycaps are swappable with almost any Cherry MX-compatible caps. “If you hate the caps so much, why don’t you buy better ones and get the true experience?” The first reason should be obvious: I already paid $250 for this keyboard. I’m not going to pay another $100 for high-quality, thick, dye-sublimated or double-shot PBT keycaps. However, another reason is a sneaking suspicion that these MX-compatible stems are part of the reason the keyboard sounds so disappointing. I’ve watched YouTube videos of other Topre keyboards, like the Happy Hacking Keyboard Professional 2, and it doesn’t seem to suffer as badly from the upstroke noise. Also, the backlighting is an integral part of the keyboard. Replacing the caps (usually) means losing the shine-through legends, which means I paid extra for RGB for nothing.

Ultimately I’m disappointed in the Realforce RGB. Standing alone, the Topre switches are very nice. However, this keyboard seems aimed directly at taking money from idiots like me who are dazzled by colorful lights and have heard the buzz around the illustrious Japanese switch. It’s poorly built for the price, lacks many of the finer touches present on more traditional Topre boards, and serves as a poor introduction to the cup rubber phenomenon.

That said, if you’ve got money burning a hole in your pocket and you want the buttery smooth typing of Topre without sacrificing the gamer-focused features found in competing designs, the Realforce RGB is your only option. If you just want to try out Topre, I’d recommend the bland, but far cheaper Type Heaven series of keyboards. Anyone that does a serious amount of typing will, I believe, quickly come to love the relaxing and satisfying feeling of this divisive switch. It’s just a shame the investment required to get in is so high.