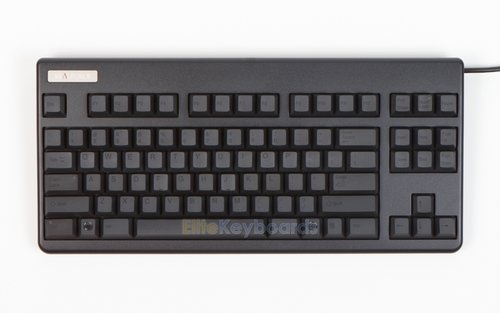 On a whim after I wrote my Realforce RGB article, I decided to sell that keyboard and pick up a Realforce 87u 55g instead. I kept thinking that my experience with the Realforce RGB couldn’t be the norm for Topre keyboards. They’re so loved by many mechanical keyboard enthusiasts… surely they’re not all just misguided? After doing a bit of YouTube research into the sound profile of other Topre boards, I decided to give cup rubber another chance. I’m glad I did.

I don’t have time to write a full review of the Realforce 87u, so I’ll just give some quick impressions. Probably the best praise I can give the board is this: it feels exactly like I expected Topre to feel. It’s soft, tactile, and gives a solid “thock” on every depression while still remaining fairly quiet—overall it’s just a joy to type on.

I still have some minor concerns about the quality of the keyboard, given the price point. The case is still made of plastic, a top and bottom plastic shell that are clamped and screwed together. There is a seam between the two halves, much like the plastic case of the Unicomp Ultra Classic I reviewed a while ago, but it’s nowhere near as flimsy as that. The cable feels cheap and weak; it’s worse than on the Realforce RGB but at least the cable gutter works properly. Despite all of these shortcomings, the Realforce 87u still manages to feel much more like a premium keyboard than the Realforce RGB did. There’s no flex, no creak or squeak, and the switches are largely consistent. The upstroke noise that bothered me so much on the RGB is almost completely absent on the 87u. Overall I have a much more positive opinion of this board than the other.

Once again, however, the elephant in the room rears his ugly mug. Not only is the Realforce 87u expensive, it’s more expensive than the RGB despite the smaller form factor and complete lack of backlight. Topre is an amazing switch when well-executed, there’s no denying it. At $270+ it just can’t compete. The switches themselves are great, but these keyboards are built like $50 Microsoft rubber dome keyboards: very sturdy and reliable, but still plastic and with some annoyances one shouldn’t have to wrangle at over $200.

Ultimately, the decision of whether or not to buy Topre comes down to whether or not you can justify spending so much on what are, in my opinion, quickly diminishing returns. For $200 you can buy some of the highest quality keyboards ever manufactured, and at $300 you can get a custom-built mechanical keyboard made from carbon fiber plates and $1-per-unit Zealios switches. Topre promises an unparalleled tactile typing experience, but without the rest of the package to back it up, it’s hard to recommend such a barebones keyboard.